I thought she came back but She has never left

Since December she was invisible to all while the men drove by and strolled.  Occulted, veiled, she never stopped analyzing all the different faces and classifying friends and foes. She disclosed herself a month ago as I was invited back to Malabar. I am back because of one man’s wider shoulder and heart to take the blow of my presence. He defied the others all of them.

Few days after I arrived she came and called me but still refuses another hand than yours.

Every day her companion tells me stories while her silence morphs them into legends. Close but unattainable, calm composed on the closest branch behind the workshop, she spends more time there each day. She doesn’t take from my hands anymore. The link was broken and it will take a while to weave it back, if it ever does again. She follows me around on the ground site and I can hear her while going back on the surface.

She calls for you, she ask for you.

I will whisper to her what I do not know, the how and the why, the maybe and the certainties that escaped me. I will feed her your silences.

She wants to calm by her sole presence the angst and the tensions like she knows so well to do, walking, swinging her heavy left wing so close to the ground in a careless manner.

Her clan, hails and croon, murmur and coo while she linger lazily and softly settle into the sounds of  Malabar plant, scrutinizing me and the surroundings.

She misses you and the games you played and she has come back looking where your spirit cling …yes it is there nested in the memory of many. 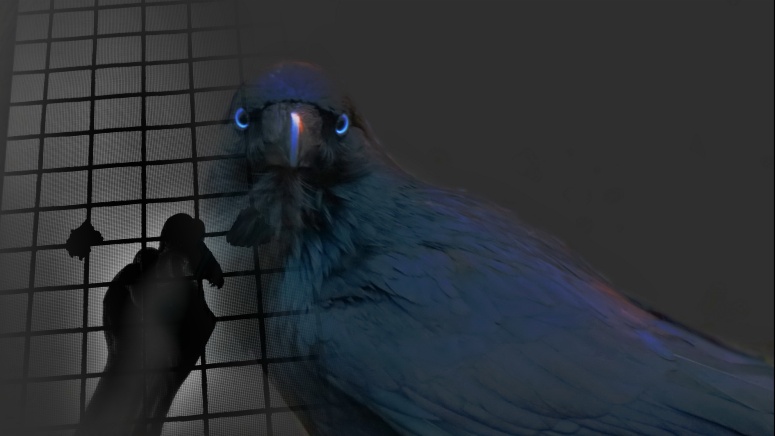 Forgot to say, that after 4 weeks away I was not too sure to see many ravens around Malabar, but I was wrong, as soon as the van pulled over 3 of them were there, and later in the afternoon Phatso came to say hello, ever so gentle, and still the boss!

Not many things do trigger deep emotion in the Ape, but this black bird does, how amazing! Ever so gentle!