The space is now set up to please, a corner of rust open to the sunlight. The metal bend and twist in sublime convulsions, burned edges and pallets of rust.

He is facing the bared window overflowing of sun after a morning of heavy rain.

Sometimes he cuts sometimes he hammers. On the board where he is working a strange long neck prehistoric bird appears with dented wings and a wide open beak. Since then he told me the creature wasn’t pre but post historic.

Once again he surprises me with the tumult of his imagination. He starts with anger adjusting the curve of the neck of his creature and setting the rust together. However slowly peace is settling down, the swearing is fading towards a “yes yes yes”, movements are more even and fluid as the light hits his glasses while he bends down towards the work bench. I can see a pure transparency in the gray-green of his eyes.

He then displays clouds and works methodically on the flight of a beast who define time and geography roaming a planet only us can see.

I feel so special to be present.

The magic is suddenly interrupted by both of our phone.

Winter is at its end, I arrived almost 3 months ago and I still have no idea of what tomorrow holds for me. 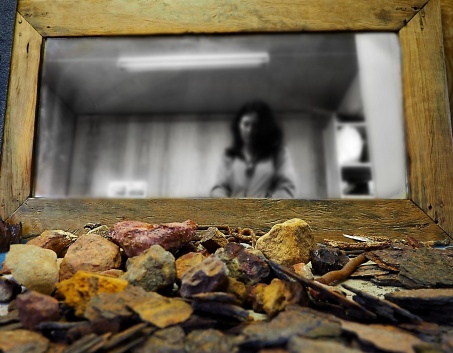 2 thoughts on “The flight of the post historic bird”